I recently got an e-mail from one of my readers Ron. We had done a trade long ago, and he said that he had another stack of cards I might be interested in. Me being one to never say no to cards I need, I said I was game. Once I opened the box of cards Ron sent, I was a happy boy to say the least. On top was these three beauties that were all on the Prime 9 list:

Now added to the list: 1981 Fleer Murphy and 82 Donruss Murphy
Of course as everyone knows, me being the biggest Tony Gwynn fan I know, Ron included about 25 other Gwynn's including these older cards I didn't have: 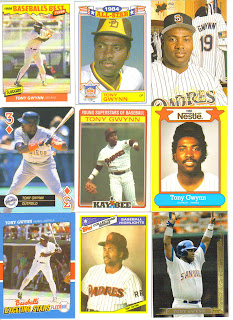 Not to be forgotten, Ron also sent some Mariners cards new and old. Some of these guys were well known, some not so much. Some were here for a blink of an eye(Bobby Thigpen), and some were long timers(Ichiro, Edgar). Not to be forgotten, I found about 6 cards that I was able to scratch off the Super Set wantlist. That now brings it down to 516 cards I need to finish off that big bad boy. Please take a look and see if you can help, I would like to get down to needing less than 200 by the end of the regular season. 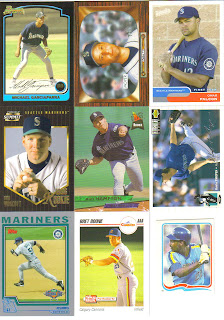 Thanks again to Ron, you need to start your own blog to show off some of the great cards you own. And to all my fellow collectors if you get an e-mail from Ron about a trade, go for it he won't disappoint you.
Posted by Mariner1 at 7:38 AM