Mariners by the numbers part 42-43

Ken Griffey Jr. 1997
from tradingcarddb
Ken was the inspiration for players to eventually wear 42 on April 15 after he did it in 1997 to celebrate the 50th anniversary of Jackie coming into Major League Baseball.

Butch Huskey 1999
Butch was the last full time player to wear 42 as a Mariner after it was retired by MLB in 1997. The last 42 left after 2013 when Mariano Rivera retired.

In 2007 we saw the 60th anniversary of Jackie Robinson and Miguel Batista, Adrian Beltre, Jason Ellison, Jose Lopez, and Arthur Rhodes all donned the 42 to honor Jackie. In 2008, MLB let it happen again. This time Batista, Beltre, and Rhodes wore 42 again along with Yuniesky Betancourt, and John McLaren. Since the start of the 2009 season, all players and coaches wear the 42 on April 15th or 16th depending on if they play on Jackie Robinson Day. I think it is great to honor the history of the game but I still feel like it lessens the impact by everyone wearing it. I you want to know how I feel, look at this from 2011. 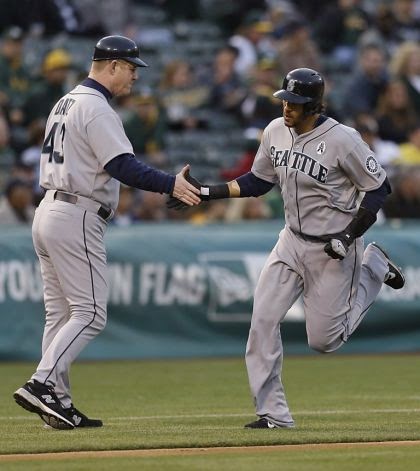 Posted by Mariner1 at 8:32 AM No comments: Links to this post

Mariners by the numbers part 40-41

Posted by Mariner1 at 7:19 AM No comments: Links to this post