First off, I would like to congratulate my son on being only 1 of 2 boys in the 7th grade to made the varsity squad of his middle school baseball team. It is quite an accomplishment considering the talent of the other guys on the team. Secondly, since our trip to San Francisco and doing more pitching for his school team he has been studying pitchers. While he is a fan of Nolan Ryan, Felix Hernandez, and Jonathan Papelbon, he has found his new favorite. He wants to pitch like a local kid, The Freak. 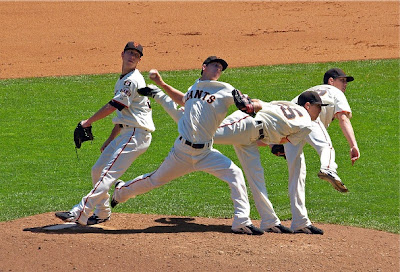 Tim Lincecum
While I haven't gone through my cards yet to see what I have of Tim for him, I will try to make a list soon of cards needed to make him a happy fan.
Posted by Mariner1 at 5:09 AM 2 comments: Links to this post

Past, present, and the future

It is amazing to think where we have been, where we are, and where we are headed. In 10 years so many things have changed. I think it was great that many schools decided to do a tribute of some kind to the innocent victims of ten years ago. The University of Washington did a one time helmet change for yesterday. 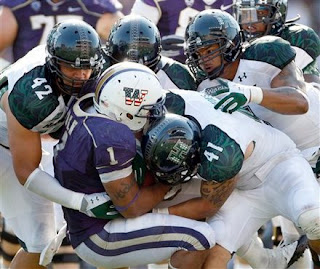 The NFL finally decided to relent and let players wear special gear to honor those lost today, but originally was going to fine players for wearing unauthorized equipment. 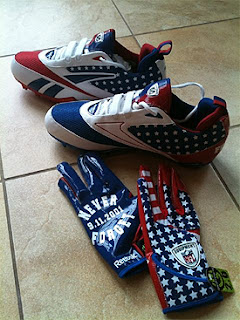 I wonder we go from here. Will we ever know the full and true facts of what happened that day. I am by no weans a conspiracy theorist, but I have seen and read many things on it, and it makes me question the accurateness of all the reports we here.  This might be the most bizarre case of all- READ ME. I don't know what to make of it. Let's not forget as the NFL starts up this weekend, the man who walked away from the sport, and did what he felt was right. 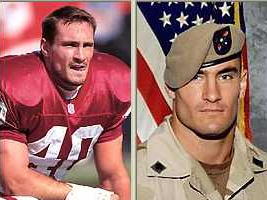 Thanks to my boys in blue in Ann Arbor for taking ten years off my life by giving me a heart attack in the 4th quarter of this historic game last night. 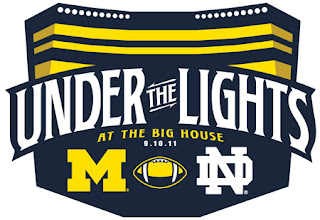 Thank you to all that have served this country, all that are out there today defending us, and to all that lost thier live ten years ago today for no reason and were taken away from us.

Posted by Mariner1 at 8:00 AM No comments: Links to this post

If you haven't heard the news, it is absolutely devastating. Yesterday in Russia a Yak-42 was just taking off from the town of Yaroslavl bound for Belarus. The aircraft was carring members of the Yaroslavl Lokomotiv hockey team of the KHL heading for the opening games of the season. The plane unfortunately crashed after take off. In the crash 43 people lost their lives and only two persons escaped with their lives. Among the players and coaches that were lost were 10 former players that saw time in the NHL. Games have been postponed across the league this weekend. My heart breaks for each and every one of the 43 people's families. 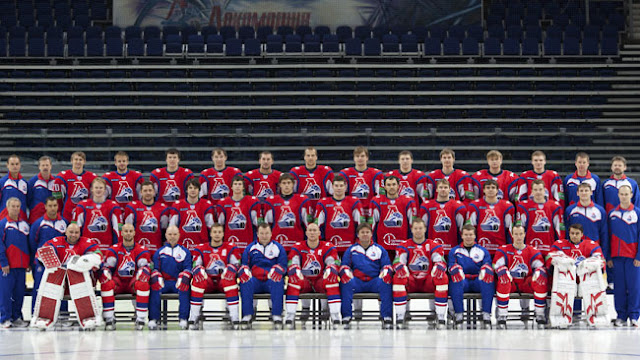 Posted by Mariner1 at 5:08 AM No comments: Links to this post

We all know that September is the time for call ups of guys that have a future in the bigs. It also is a time to give what might be the one opportunity to show up in the majors and possibly never been heard from again. I'm not sure where this guy will fit in, but he does have a pretty amazing story. 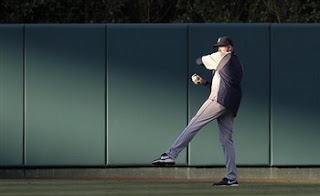 This spring, when Steve Delabar was coaching high school baseball and working as a substitute teacher in Elizabethtown, Ky., playing Major League ball was the furthest thing from his mind. At 28, he'd never pitched above Class A ball in the Padres' organization before he wound up throwing in an Independent League and fracturing a bone in his elbow that by all rights should have ended a career that really wasn't going anywhere at the time.

So Delabar had surgery on his elbow, with doctors inserting a plate and nine screws, then fed his competitive fever by playing slow-pitch softball while taking classes at the University of Louisville and working as a part-time teacher. Mariner manager Eric Wedge said Steve Delabar wouldn't have a set role in the Mariners' bullpen, but he's eager to see him pitch. Now here was Delabar on Tuesday, putting on a Mariners uniform after being promoted to the Major Leagues following a whirlwind season in which he climbed from Class A for a September call-up. Delabar missed all of last year after doctors wired his elbow back together following two seasons of Independent League action with the Brockton Rox in the Canadian-American Association.

The 6-foot-5, 220-pounder was coaching at John Hardin High School when he got a tryout with a scout, who recommended the Mariners give him a look. Next thing he knew, Delabar was working his way up through the Minor League system, first at Class A High Desert, then Double-A Jackson and finally Triple-A Tacoma a few weeks ago. "There was a point when I first broke with the High A team, and I'd given up a couple runs in a game and I was the oldest player in the league, and I was thinking, 'What am I really doing here? Am I wasting my time?'" he said. "Then I had a few good outings in a row and I got promoted. I said, I can go with this. I'd never played in Double-A before." 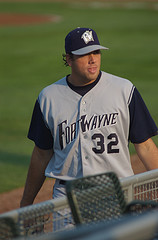 Delabar opened eyes at each level, winding up with a combined 2.25 ERA and concluding things with a 0.69 ERA and 18 strikeouts in 13 innings with the Rainiers. Now he finds himself in the Majors with a Mariners squad that has 13 other rookies on the current 31-man roster.

What's worked this year? "Everything," Delabar said. "Everything has been in place. My velocity is good, and that helped a lot. But just being in the right place at the right time and having the right people see you is a huge thing. Timing is everything." Delabar got word after Monday's Triple-A finale in Tacoma that he was going to the big leagues. The news stunned him so much he could barely speak when he phoned his family.
"I called my wife and couldn't even talk," Delabar said. "I called my dad and I couldn't even put a sentence together. I was just torn up. It's a pretty good feeling." "All the reports are that he has a great arm, his secondary stuff is very good and he's been very consistent," Wedge said. "He's the one who pushed himself up here by the way he pitched down there."

All quotes used from story that appeared on seattlemariners.com

That's right! It looks like I'm joining the club of older people. That is not meant as an insult to anyone. My wife and my son tease about turning 40. Now all my friends can laugh at me too. I thankfully don't feel old today. I'm looking forward to continuing the ride. The first 40 have been so far, let's see where this thing takes me... 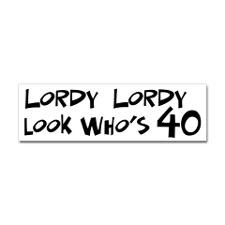 Posted by Mariner1 at 4:55 AM 7 comments: Links to this post

I must admit the ecstasy of seeing a new park was great. The fans around us couldn't have been nicer. The public transportation to and from AT&T Park was pretty much a breeze too. I really did enjoy the look and the feel of the park. A bit breezy at times, but I was prepared and wasn't cold.

The agony was to find out on Saturday that the kid we saw in Seattle, and is a two time Cy Young winner was pitching, but wasn't sharp. Lincecum did what he could to keep his team in it, but his offense didn't help. While I would have liked to see the Giants win and continue to gain ground on the D-Backs, they couldn't pull it out and remain 6 games back in the division.

Since we get home late tonight and I have to work tomorrow, I will try to get up some pictures of the sights from the ballpark in a few days.
Thanks again to the Giants and their fans for a great experience!!
Posted by Mariner1 at 6:45 AM No comments: Links to this post

Leavin' on a jet plane

That's right, today's the day. Tonight on getting myself on one of these bad boys: 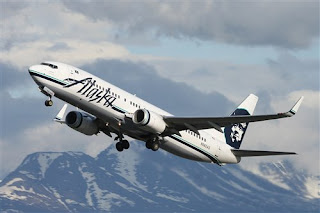 My family and I are headed to San Francisco for three days for my 40th birthday. While my birthday isn't until next Tuesday, this was the only time we could go. While we are in the Bay Area, my main goal is to make it here: 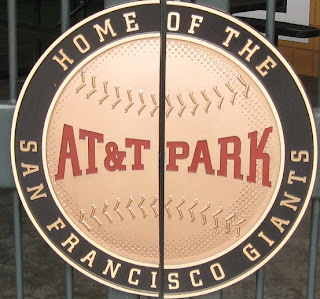 I have my tickets and am really looking forward to see this beautiful view of this nice park on Saturday night: 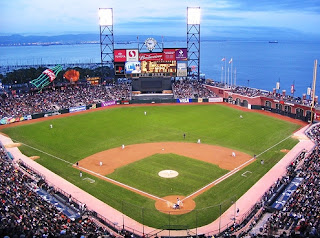 It looks and seems like it is a great venue and has great sights, but it still isn't my beloved Safeco Field.  If anyone has suggestions or knows of thing I need to see or do at AT&T, let me know I'll be keeping up to date on he blog on my phone. I hope to see a Giants win, and I hope the Beard will back in time to make an appearance. 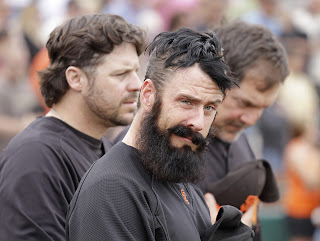 Posted by Mariner1 at 8:27 AM 2 comments: Links to this post