Time again to take a trip down the Mariner memory lane. This time is one of the lesser known, but equally important players. A Washington kid from the east side of the mountains. Dave Edler was born in Iowa, but grew up in the eastern Washington town of Yakima. While playing high school baseball for Eisenhower high school, Dave was also a member of the Yakima Beetles. The Beetles were an American Legion team that in 1975, not only featured the national player of the year in Mr. Edler, but also went on to win the World Series. Dave was able to parlay that success to play for Bobo Brayton at Washington State University. In 1976, Dave and the Cougars made an appearance in the College World Series. During the summer of 1977, Dave played on the famous Alaska GoldPanners team of the Alaska Summer League. That team finished 2nd in the NBC World Series. That 1977 team also featured Mike Boddicker, Vance Law, Tim Leary, and Scott Sanderson who all made it to the Major Leagues. While he did have his demons at WSU, Dave found himself drafted in the 21st round of the 1978 draft by his hometown team. Dave left college a few credits short of graduating, but had the potential to make it to the big leagues.
Dave started that journey in 1978 with the Bellingham Mariners under manager Bob Didier. Dave has credited coach Didier as have the biggest influence on his playing career.1979 saw Dave move to the A San Jose Missions. The next year was another move up the ladder to the AAA Spokane Indians in 1980. In the end of the 1980 season, Dave was a September call-up. While the Mariners had been using Ted Cox, and Bill Stein at third base during 1980, Dave was given the starting job for the rest of the 1980 season. 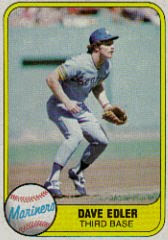 Dave won the job as the opening day starter at third base for the Mariners in 1981. He was the starter for most of April and May of 1981. Unfortunately, due to the incompetence of the front office, and field management Dave was sent back to AAA Spokane. They thought that the combo of Dan Meyer and Lenny Randle would be better at 3B. Not long after Dave was sent to the minors, this is the play Lenny Randle is remembered for: 1982 started with the AAA Omaha Royals, but from July to the end of the season Dave was back with the big club. He split time at third with Manny Castillo. In 1983, Dave started the season with the Mariners, but once again couldn't get consistent playing time battling Jamie Allen and Manny Castillo for time. Sadly, June 9, 1983 would the last time Dave would play a major league game. He would finish the 1983 season with the AAA Salt Lake City Gulls. Due to shoulder problems, Dave left pro baseball after the season. 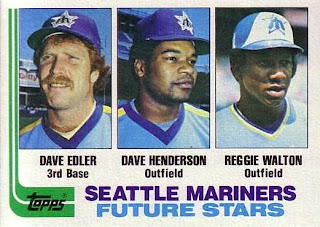 During his time in the minors, Dave turned to a Christian teammate on a bus trip, and was able to find himself a new direction.  In 1984, moved back to Yakima and worked in a family business. He also volunteered in Young Life, a Christian youth ministry. Also in 1984, Dave played in the Inland Empire Semi-pro League for a team sponsored by M.G Farms. In 1985, Dave went on staff with Young Life for the next 8 years, growing the Yakima chapter to one of the largest in the nation. During that time he also was a coach at his alma mater, Eisenhower High. From 1993 to 1996 he also coached the Yakima Beetles, The same Legion team that he had played for when he was younger. In 1995, he led that team to a state title. 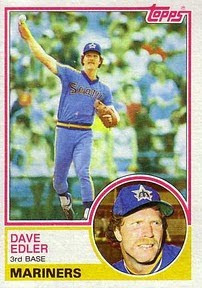 1994 saw Dave accept a position as pastor of the Yakima Foursquare Church. He still holds the position today, and the church sees 1000 to 1300 parishioners weekly. In 2004, Dave ran for the Yakima city Council, and won a seat for District 2. In 2006, he ran for mayor and won. As of today, Dave is still on the city council in the city of Yakima. He is married to his wife of 27 years, Susie who also runs the ministry with Dave. He is a father of three children and has opened his home to seven other children over the years. I would like to extend a thank you to Mr. Edler who accepted my e-mail and was able to help me with some of the background information on his life after baseball. 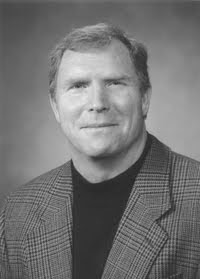