Going back in time

I recently put up that I had decided to try and collect the 1980 Topps set. I decided to show some of the reasons I really like this set. Besides the fact that this was the first set I really started to buy cards for every time I would go into a 7-11 as a kid, I still love the design. This set featured some stars that were at the end of their careers, some that had played for a few years, but weren't super big time yet, and a some up and coming rookies. My favorite part is the colors and the styles of the uniforms.

There were also some great things to look for like, the future stars cards to know who was up and coming. 1980 was way before the age of the Internet.

You got to know a few of the records that were broken from the year before.

What would Topps be without their notoriety for airbrushing that wasn't all that great??

Topps was kind enough to show who made the All-Star team from the year before. A tradition they would end after 1981's set of cards.

You got to see a picture similar to the ones that would be handed out to fans at stadiums at the end of the year, showing you the entire team and coaching staff just like our pictures of our Little League teams.

You had to know who was the League Leaders in big time categories for the year before for pitchers and hitters.

The backs were a simple design with a color that was easy on the eyes. You got stats, you got a little bit of knowledge about the player, and you would get some great cartoons on the side too to keep it fun. 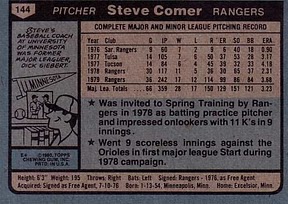 The other great thing you would get is lots of Checklists. You would use them to keep track of what cards you needed to finish off what you didn't have. You didn't realize that they were part of the set and you would mark them with a ball point pen. Now they are considered damaged cards.

I believe besides the 1980 Mariners team set I put together in the Super Set, I only own 2 cards from this great set. Let me know if you could help an old guy try to recapture some of his youth.
All photos of 1980 Topps were used from The Baseball Card Cyber Museum

Email ThisBlogThis!Share to TwitterShare to FacebookShare to Pinterest
Labels: 1980 Topps