I don't have anything for today. Here is a random Mariner card I picked to show you today. I present former Mariner 2nd baseman and Spanish radio broadcaster Julio Cruz. 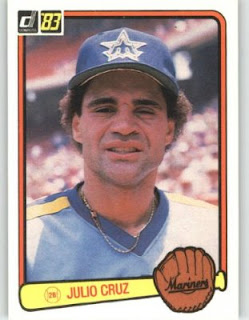 The Cruzer has the mini fro and the chain working, but his eyes kind make him look like he might be stoned. Julio left in a trade to the White Sox, but found his way back to broadcast for the Mariners for awhile. Julio was one of the first stars on some bad teams back in the day.
Posted by Mariner1 at 5:07 AM