Utmost respect for him

Since most of you don't follow the Mariners like I do, you may not have heard this news. I have found a now former player that I have an immense amount of respect for right now. 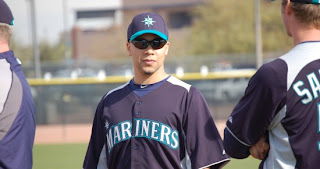 Now former Mariner Jody Geut decided on Sunday Morning to call it quits and retire from baseball at age 33. Here are some quotes from Gerut from the Seattle Times:
"I can no longer, in good conscience, play the game in a manner that reflects the positive example for the younger generation of baseball players," Gerut said, reading his prepared statement. "Physically, I'm fine. But mentally, my reasons for wanting to be in uniform have become so thin and narrow that I refuse to disrespect the game that has provided so generously for my family by playing it in a halfhearted way. This game of ours owes me nothing, but I owe the game at least that much. When a player finds his willingness to compete so greatly diminished, that player must leave the game so as not to disrespect it by becoming a player who plays solely for his paycheck and his own personal glory."


"This is a notion so distasteful to me it makes me physically sick to my stomach. So I will now focus my attention on the well being of my family as I start the next chapter of my life. My children need their father, and my wife needs her husband to be a bigger part of their everyday lives, and today I won't have it any other way. I give thanks to God and to the fans everywhere in the world who love and support our pastime, and I encourage them to hold their heroes in the game of baseball to these very high standards, because you, the fans, deserve it."

He came to camp with all intentions of trying to make the team. After three days, he said he just felt "Hollow" inside. He was able to play physically, but mentally he had checked out. I think he obviously had a huge amount of respect for the game and knows when to walk away. Jody has decided to hang out in Phoenix for the rest of the month because he says it's too cold to go back home to Chicago now. He did leave open the possibility of come back to baseball to coach someday, but right now his family is what is important to him. I wish him all the best in whatever he does. He wasn't even a Mariner for one game, spring or regular season, but he is a stand up guy in my book.
Posted by Mariner1 at 5:06 AM