I didn't have anything in mind to post today, so I dug out a random card from a box of Mariners cards. 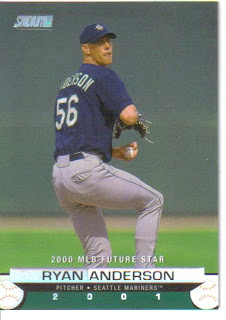 2001 Stadium Club Ryan Anderson
There was a lot of hope for Ryan in Seattle. With his 6' 10" frame, he was dubbed "the Little Unit" in reference to Randy Johnson. After being drafted in the first round in 1997, he shot his way through the minor league system. He spent 1998 in A Wisconsin, in 1999 he went to AA New Haven, and by 2000 was in AAA Tacoma. Then it all went horribly wrong. Ryan would miss from 2001-2004 with surgeries to repair a rotator cuff tear, and twice to repair a torn labrum. Ryan would try to return in 2005 through the Brewers system. When Ryan wasn't able to completely come back, he decided to retire. Ryan attended the Scottsdale Culinary Institute to pursue a cooking career.
Posted by Mariner1 at 5:04 AM