Recently another Larry, this one of Sewing Machine Guy fame was looking for '79 Topps. As a Larry that bought a ton of 79's a few years ago on a closeout deal, I was happy to help him out. For sending him a small stack of 30 year old cards, I got an entire cavalcade of players. First off were two cards from my favorite Pirate, Willie Stargell: 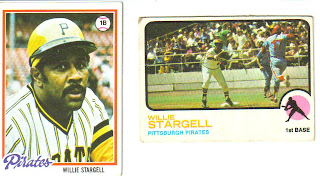 Also included in his little treasure bag was some great cards of Big Papi for my son. He saw the GU card, and said, "dad, can I just feel it? This thing is so cool!"

Not to be forgotten was my love for the Brave that should be in the hall, Dale Murphy. Murph in a Phils uni still doesn't look right to me though:

What trade can be complete without the standard Tony cards? Didn't know the guy could bunt did ya?

Any trade with me has to have at least a few Mariners. The '82 Kellogg's 3D is sick, and a Wladimir Balentien auto. It's sad to see Wlad has fallen all the way to playing Japan so soon. 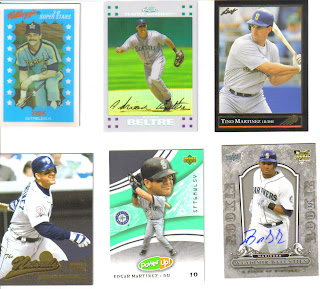 Also in the bag was a few more cards of the King. I'm really starting to pile up on Felix's cards. 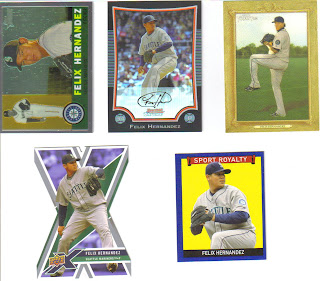 Larry was great enough to send the last four cards I needed to finish my '82 Donruss set. 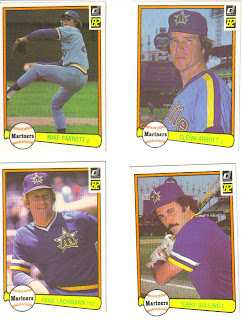 These five '84 Donruss cards get me closer to finishing off that year's set too. If you look at the Putnam and Nunez card you can see that they were taken in Palm Springs like my new collection of Angels in the Desert. I won't be looking for cards of all other players taken in the desert (too much work), but it's cool to be able to recognize the venue of the pics. 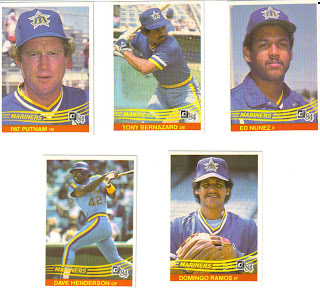 If you don't read his blog on a regular basis you are missing out. If you can, trade with him, he will definitely hook you up. Thanks again from one Larry to another!
Posted by Mariner1 at 5:10 AM

Email ThisBlogThis!Share to TwitterShare to FacebookShare to Pinterest
Labels: thank you, trade