Have you ever noticed that fans of teams in your division make great traders? I have had great experiences in the past with Rangers fans. The Angels are a team I have a soft spot in my heart for. Their #1 blogger is Tom from The Angels, In Order. He does pretty historical and in depth work on the Angels. He sent me a few cards to help out on the Mariners Super Set. 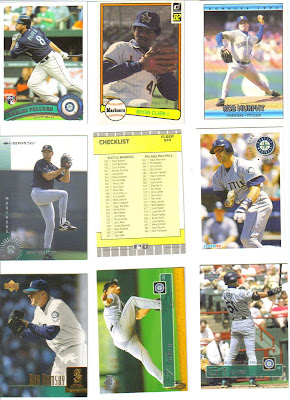 The Peguero gets me one closer to finishing 2011. The two Donruss cards finish the 1982 and 1992 sets. I'm finding that the more I chip away at this thing, it seems like myself and no one else was collecting in the mid to late 1990's. Most of my wants seems to be in that era. 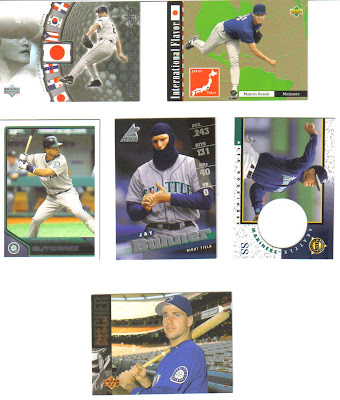 Tom also sent these that will be going into the boxes of different Mariners cards. I like the two players with coneections to the ownership in Japan. The gutierrez is my first Lineage card since I don't really buy much other than flagship stuff. I can't figure out why the A-Rod has a hole in it, is that where the steroid syringe goes into his butt cheek? I think it's cool to see a pitcher like Salkeld with a bat in his hands. I don't like to see pitchers hit though, both leagues need to use the DH. Jay Buhner is wearing the face mask and glasses so nobody will reconize him in New York.


Big thanks again to you Tom. Keep up the great work on the Angels. I wonder if Athletics fans make good trade partners? Does anybody know of some active A's traders? Hello Oakland fans are you out there?
Posted by Mariner1 at 7:25 AM