Some picks after buying new kicks...

Yesterday ended up being kind of a guys day. My wife had to attend a funeral for a co-worker, and that left the boy and me to our own devices. After taking him to the golf course and taking my butt whooping from him, the kid shot 37 for nine holes while I shot a 63. We were deciding what to do for the rest of the day, knowing we should clean around the house. We decided to take a drive in mom's car and head out to find him soccer cleats for the upcoming fall season. After a trip to Dick's and finding a reasonably priced pair, it was off the the University book store. The two of us were like kids in a candy store, because the was Husky purple and gold everything. I decided to pick up a new Nike purple sweatshirt and he got himself a new UW case for his iPhone.

We both decided after watching the Blue Angels fly over for a short time, and that mom wasn't going to be home for a while still and even though the air conditioning was on at home on a 90 degree day we didn't want to just sit on the couch. Being not but a few miles from our favorite and only card store we decided to make a run up there. The guy that runs it, Don has got to be one of the nicest owners around. He seems to always have what you are looking for, and usually at a pretty reasonable price. If you look at DJ's website, I think you might be able find something you want too. After a little more than an hour of going through the 4/$1 Mariners boxes, I was making out like a bandit for the Super Set. I was able to knock 2012 off my list, and also get Donruss and Score down to not needing much to complete those makers too. One card I bought two of was this not only for the binder, but also for my PC of his: 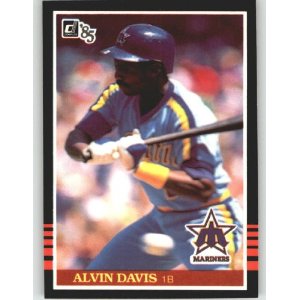 When I was looking around for any last minute tidbits I might have missed( I didn't even look at 3/4 of the store), I saw a couple of Mother's cookies cards of Alvin's and thought I know I don't have them what the heck for a quarter. The best part was when I got home and was checking one of them out closer and low and behold look what I found! 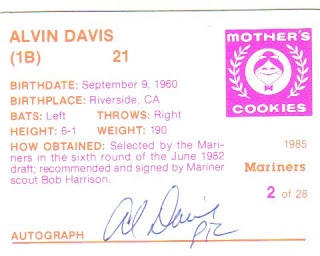 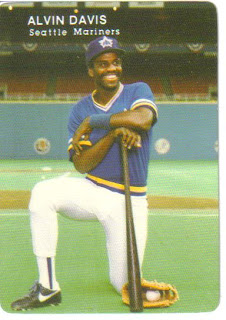 A beautiful 1985 card from the year after winning the AL Rookie of the Year, and it is signed in ball point pen!! How awesome is that, especially for a big AD fan. Not to be outdone, my son found a card he really wanted. If you don't remember, when he plays sports he always wears #8. He has done that ever since watching the DVD's of the 1979 World Series and falling in love with Willie Stargell. It has gotten to where everyone in all his sports calls him Pops. He saw this card and fell in love with it, and how could I say no to an early 14th birthday present to the boy. He is now the proud owner of this card of the late great Willie: 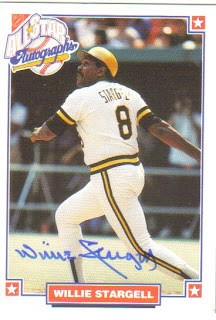 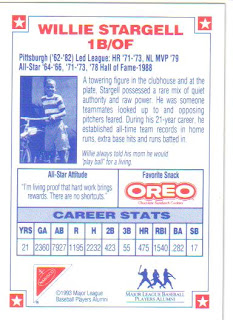 All in all, I think I might have dropped $40 for over 100 cards, but it was totally worth it for the time we spent together and the fun we had. I'm proud to say I'm getting closer to wrapping up the Mariners Super Set. Do you think you could help out and get me closer to finishing this thing? I will get the want lists updated by maker today to insure I have the right needs out there. ﻿
﻿
Posted by Mariner1 at 7:02 AM