When was the last time there was two perfect games in the same stadium in the season?? When was the last time a time a team was perfected only to throw their own perfect game in the same season?? If you answered never you would be incorrect. Those statements were true until about 3:30 PM on the west coast today. The Mariners are young, and sometimes look like they might have some promise to come in the future. They had a superstar that really never connected with the fans and was traded to the Yankees earlier this year. There is a Mariner player that is loved throughout the Northwest. 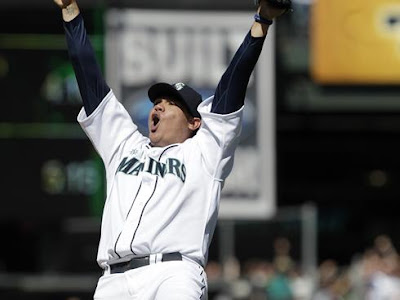 He is a homegrown talent that is in his 8th season as a Mariner. As he has continued to get more mature, he has found ways to connect with the fans only to fuel the love fest. He loves his fans on Twitter, has fun with his alter ego Larry Bernandez, continues to embrace the King's court sections in the stadium during home games when he pitches, and doesn't hide by making believe that he doesn't speak the language. All the work that he does on and off the field were rewarded today. King Felix gave 21,889 fans at a sun soaked Safeco Field the honor of watching him pitch the 23rd perfect game in MLB history. While I missed the game due to having to work to continue living a modest lifestyle. The text alerts were coming and I was excited even though I couldn't see or hear the game. You can guarantee that I am watching the replay right now as I type. Here's to hoping that we will continue to watch The King continue to expand his already fabulous career in a Mariner uniform.

Today is all about Royal Perfection!!!
Posted by Mariner1 at 7:59 PM